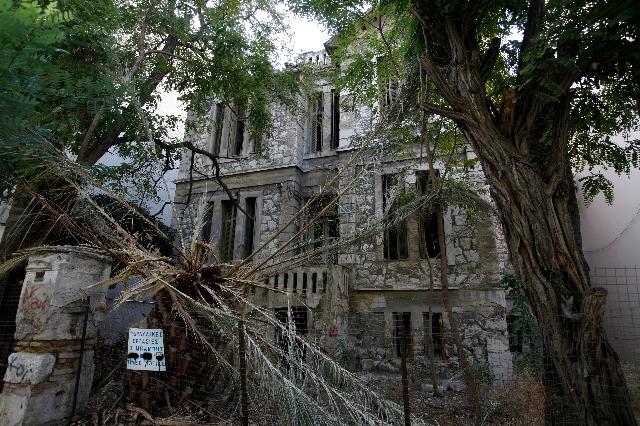 If you could find out if someone died in your house, would you want to know? Founded in 2013 by software engineer Roy Condrey, DiedInHouse.com allows users to search an address to see if it had a dark former life (or even accommodates the afterlife). From murders and suicides to meth activity and arson, DiedInHouse uses data from over 130 million police records, news reports, old death certificates and more to determine if your house has seen horrors.

The website’s creation begins like a ghost story. Three years ago, Condrey received a text message in the middle of the night from one of his tenants that read: “Did you know that your house is haunted?” Condrey went down a cyber rabbit hole seeking, but not finding, an easy way to determine if his property had indeed seen a gruesome crime or fatality.

“I went online to find a ‘Carfax’ of sorts for deaths in homes and I didn’t find anything, but I did find pages and pages of people asking if there’s a way to find out if their house is haunted,” says Condrey, who rents his a number of his properties. He later learned through his data collection that, in fact, at least 4.5 million homes nationwide have had documented deaths take place on the premises. The number of homeowners that know about the history of their home is unknown.

“There was no database for this information until DiedInHouse.com,” says Condrey. The self-proclaimed entrepreneur is the site’s President and CO-CEO. For his day job, he helms a software company called Simply Put Solutions in Chapin, South Carolina. He was inspired to build the database after he learned that in many states, real estate agents are not legally obligated to tell interested renters and home buyers about prior criminal activity in the homes because it is not considered a “material fact” or structural detail about the property.

Condrey believes that prospective homeowners should be told this kind of information because it could sway their decision. “The intent of the site is for buyers and renters. The realtor is trying to sell, so they won’t disclose if they don’t have to.” And for good reason, prior death or violent crime in a home can reduce its value up to 30%, according to real estate site Trulia.

When users visit the site they are asked to put in an address and are taken to a page with pricing, starting at $11.99 for information about one address. The site’s algorithm relies on records largely collected after the 1980s, when information started being digitized, but his team has been working to gather records from long before that.

DiedInHouse has sold more than 40,000 reports to date, but with the upcoming site redesign Condrey thinks sales will see an increase. When asked about prospective users who might think the website is a scam, Condrey explains, “It’s a legitimate site. A DiedInHouse report is not a one stop shop. It’s due diligence. You should still ask your agent and talk to neighbors.”

Besides prospective homeowners, other visitors who frequent the site include ghost hunters and those who study paranormal activity. The website traditionally sees an uptick in traffic every October, as people get caught up in the Halloween spirit. Last spring the website caught the eye of 20th Century Fox which partnered with DiedInHouse for its film Poltergeist, presenting curious viewers free searches on the site if they used a promo code at the end of the trailers. This marketing tactic drew horror flick fans to the site in droves.

So, how well does DiedInHouse work? FORBES fed five addresses into the database, and found that it accurately provided information about a meth lab bust at an Ohio home, the murders at the Amityville Horror House and detailed correct ownership of an upstate New York office building.

“Ignorance is bliss,” says Condrey. “But I would like to know.”

Before Buying or Renting a Home, Get Informed About Everything! Use DiedinHouse.com to Learn the House History.


Purchase my Own Search! Back
Join the Diedinhouse.com Affiliate Program! Earn a monthly commission by helping sell our reports! Learn More