There's a Website to See if Anyone's Died in Your Home [DiedinHouse.com]

Roy Condrey founded DiedinHouse.com back in 2012 after his tenant in Irma, South Carolina, complained of ghosts and he started to research the possibility of deaths on the property. Like hiring a private investigator for your home, when Condrey's team isn't working diligently on your home's history, you'll find them featuring America's creepiest murder homes on their Instagram. 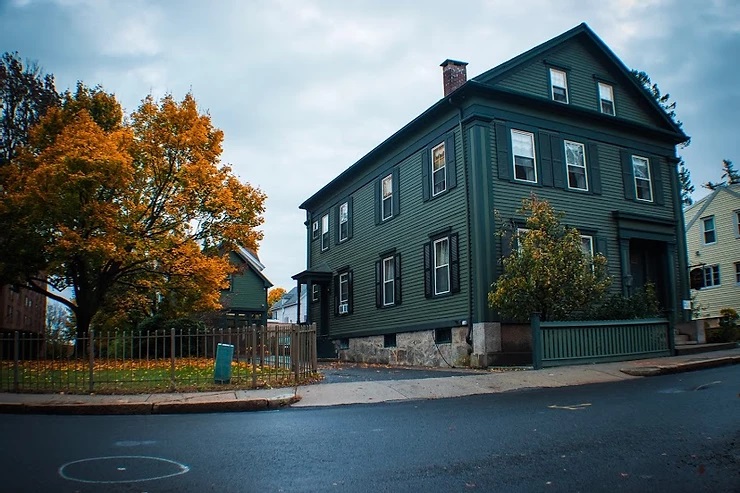 Roy Condrey founded DiedinHouse.com in 2013 after he received a very surprising phone call from one of his tenants in Irma, South Carolina. The single mother renting his home had been experiencing paranormal activity ever since moving in. But digging up his home's history proved more challenging than Condrey had ever anticipated. That's when he decided to found DiedinHouse.com - the first of its kind, web-based service that helps you find out if anyone has died at any valid U.S. address.

With 118 million records pertaining to properties in the United States, DiedinHouse.com generates an instant report that collates:

In less than a minute, DiedinHouse.com generates an instant report about any U.S. address and they will continue to investigate the address further, sending a more in-depth property assessment within 30 days. A single search costs $11.99 and Condrey tells me they add roughly half a million property records to the site each year.

On Instagram (@DiedinHouse) they profile some of America's creepiest murder homes. Like the home below, where the Easter Sunday Massacre took place on Easter Sunday of 1975 when James Ruppert killed 11 of his own family members in one of the deadliest shootings to occur at a private residence. Police said the Hamilton, Ohio home looked like a slaughterhouse with blood seeping through the ground floor and into the basement. 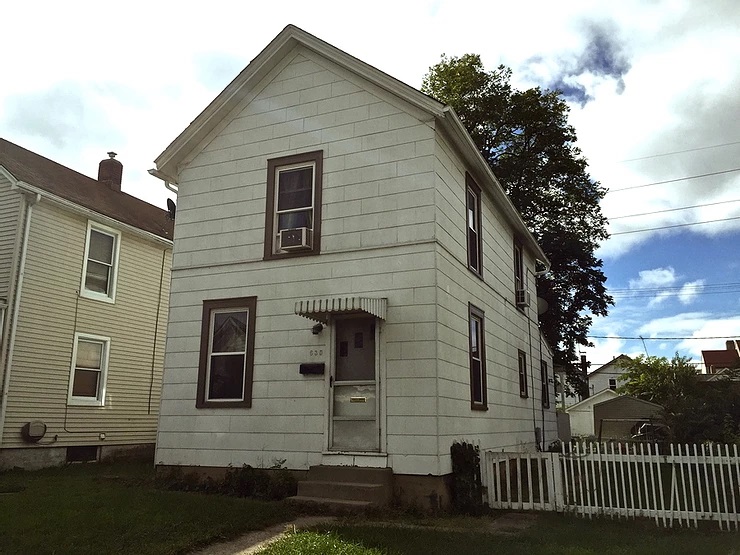 Not every house profiled by DiedInHouse.com is the site of a deadly murder spree, though. Some homes like the Sallie House in Atchison, Kansas are the site of a tragic accident and have since become a hub of paranormal activity. Built around the turn of the 20th century, the Sallie House is named after the 6-year-old girl who tragically passed away inside the home from a botched appendix surgery.

In 1993, a couple living at the Sallie House felt an ominous presence inside their newborn's nursery and their dog would growl at thin air. Things turned sinister when unexplained fires started breaking out around the home and an unseen presence began scratching the husband on his abdomen and back. Psychics say Sallie is one of many spirits at the property which can now be rented out for $500/night to anyone who's brave enough. I don't know about you but the thought of a little girl ghost is especially terrifying. 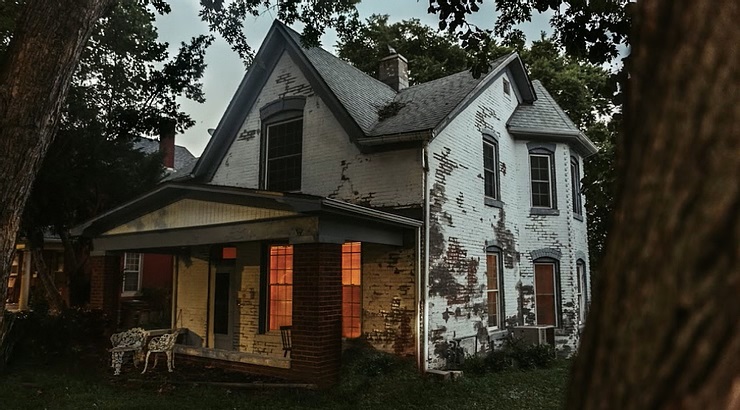 Before giving this website my blessing, I wanted to test DiedinHouse.com using the addresses of two friends who have both had deaths occur in their homes, prior to moving in. I wanted to see if DiedinHouse.com would pickup on these deaths or if they would go undetected. Sharing my results below:
House #1 (Los Angeles)

I first used the address of a good friend who moved into her home at the beginning of last year. I remember learning about the death that occurred inside her home during a mommy & me class she was hosting. She and I were engaging in side chatter when I exclaimed, a little too loudly "someone died in your dining room?" I would soon find out, it wasn't just anyone who had died in her dining room, this person was legendary. You've probably read their name in a history book. This person was on the front lines of the Civil Rights Movement, side-by-side with Dr. Martin Luther King Jr. and renowned for dedicating their life to humanitarianism. My girlfriend felt pretty honored to move into this person's home and it did not bother her one bit that they passed in the dining room. When I ran the DiedinHouse.com report on her address, it produced the deceased individual's name within a matter of seconds. 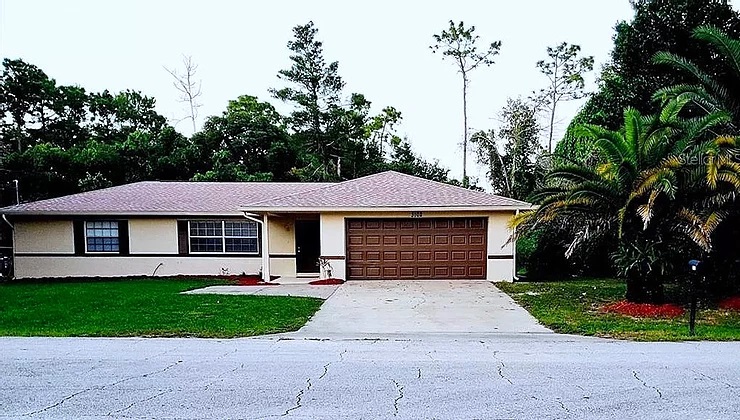 The next home I ran a DiedinHouse.com report for is located in the San Fernando Valley of Los Angeles. My friend moved into the home in 2016, having learned that a man died in one of the bedrooms about fifteen years prior. She did not know the identity of the man who passed away inside her home before I ran her address through DiedinHouse.com, only that it was the former owner's father. When the instant report on her address detected no deaths at the property, I checked in with DiedinHouse.com owner Roy Condrey about the discrepancy. It turns out, this is precisely why Condrey's team sends a more detailed property report within 30 days of every DiedinHouse.com order. His team of researchers often picks up on deaths the algorithm missed.

Through her DiedinHouse.com report, we were able to uncover the identity of the man who passed away in her home, a relatively famous television actor who now haunts her son's room. Before it was her son's room, it was her daughter's room and while I cannot share the video for privacy reasons, my friend has some extremely creepy footage of her daughter talking to an unseen presence on her video monitor. Recently, while sleep training her son, she walked back into his bedroom one evening and was stopped dead in her tracks by a cold white mist. Caught completely off-guard, she insists ghosts were the last thing on her mind when this happened in November. 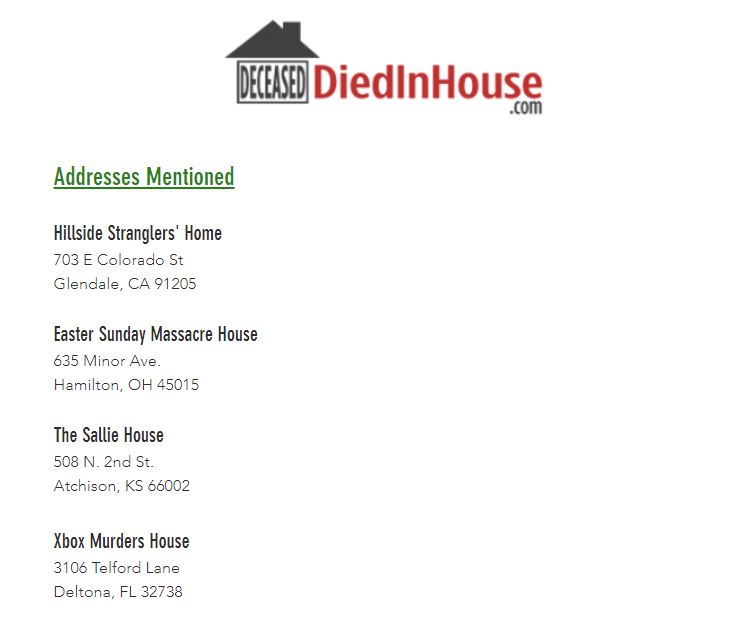 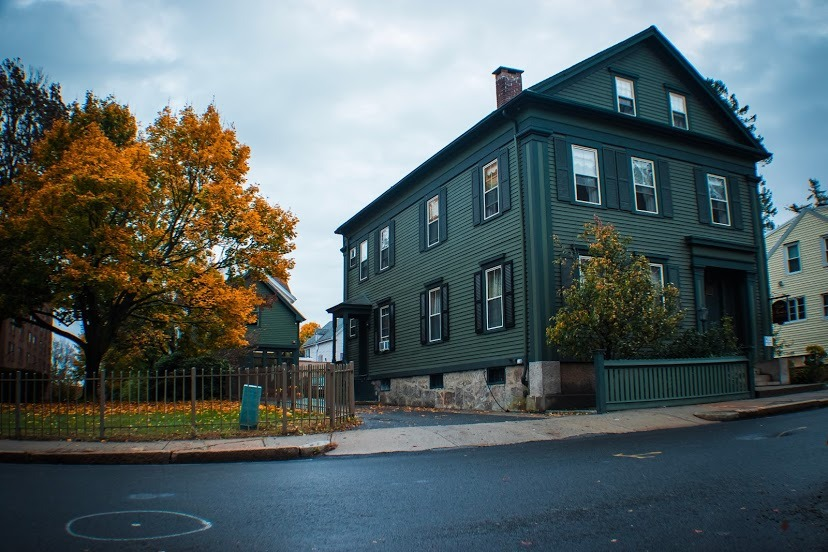 There's a Website to See if Anyone's Died in Your Home [DiedinHouse.com]

Roy Condrey founded DiedinHouse.com back in 2012 after his tenant in Irma, South Carolina, complained of ghosts and he started to research the possibility of deaths on the property. Like hiring a private investigator for your home, when Condrey's team isn't working diligently on your home's history,...


Purchase my Own Search! Back
Join the Diedinhouse.com Affiliate Program! Earn a monthly commission by helping sell our reports! Learn More